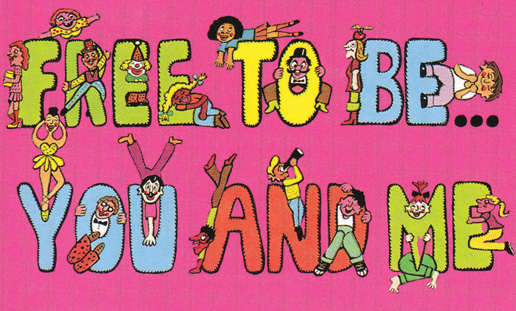 Colin came into Studio 4 with a big, black garbage filled with action figures, all of them pretty much wrestling-oriented. This is a collection he has been building for decades, and it’s just a small sample of his inventory. He had more, but they were lost in storage a handful of years ago.

The title of this episode comes from a fairly obscure place. IT was the “Donnie and Marie 1976 Christmas Special”. There is a bizarre sketch with Paul Lynde playing Santa Claus. Marie, dressed as a little girl in pigtails, sits on Lynde’s lap, suggestively sucking on a lollipop and when Santa asks her what she wants for Christmas, she shrieks, “I want a big doll that cries real tears!” Such a strange thing to say and I thought it would make a great title. I’m always on the prowl for interesting or strange titles to affix to my episodes.

A note about “Free To Be You And Me”:

Free to Be… You and Me, a project of the Ms. Foundation for Women, is a record album and illustrated book first released in November 1972 featuring songs and stories sung or told by celebrities of the day (credited as “Marlo Thomas and Friends”) including Alan Alda, Rosey Grier, Cicely Tyson, Carol Channing, Michael Jackson, Shirley Jones, Jack Cassidy, and Diana Ross. An ABC special using poetry, songs, and sketches, followed two years later in March 1974. The basic concept was to encourage post-1960s gender neutrality, saluting values such as individuality, tolerance, and comfort with one’s identity. A major thematic message is that anyone—whether a boy or a girl—can achieve anything.

This album came out a month after I was born, and this does point to the enormous psychological implications of fostering confidence, courage, entitlement, and achievement in children. This was the beginning of the “Me” movement, or at least the origins of this kind of (what was known at the time) “pop psychology”. With songs like, “Parents Are People” and “It’s All Right To Cry”, children (and parents) all over the nation were getting in touch with their feelings. This is where “William’s Doll” comes into play with lyrics like, “It’s okay for boys to play with dolls”.

My special thanks goes to Ben Minnotte at Oddity Archive for giving me some crucial advice in displaying the video for this first part of our episode. I urge you to visit www.theoddityarchive.com.