“Almighty God, dear gentle father in heaven who sees all and knows all and loves all for the little sparrow falling in the sky.” 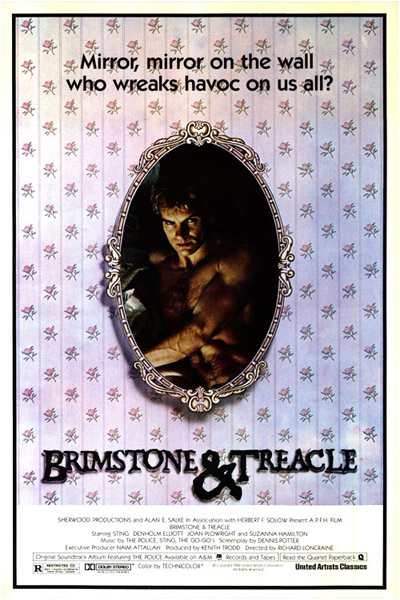 The Movie Channel was a cineaste’s dream, upon starting in the early seventies, it quickly gained a reputation for showing foreign films, obscure and bizarre work from filmmakers such as Bertolucci, Visconti, and Waters, retrospectives of Truffaut, Hitchcock, Bogdanovich, and Cronenberg, and sometimes movies with specific themes. Brimstone & Treacle was part of a month-long retrospective of musicians in movies. Other movies featured were Alan Parker’s The Wall, Ken Russell’s Tommy, and Quadrophenia, to name a few.

A very young-looking and amiable Sting exits a church along with a gaggle of angelic altar boys, plucks a carrot from the dirt and chews on it. His Martin Taylor is a clever con artist and pickpocket who worms his way into the lives of a writer’s (Denholm Elliot) troubled family. He lies that he was engaged to their crippled and feeble daughter, Pattie, and while he provides them with false hope and religious succor, his true intention is to destroy them.

The movie and Dennis Potter’s screenplay take great pains to avoid calling Taylor out to be the Devil, but there is an Exorcist-like correlation between the infirm invalidity of daughter Pattie and the need to believe she may be possessed by demons, and as The Exorcist, demonstrates, where science fails, people turn to scripture. Sting chews the scenery, the furniture, the windows, and the carpet as he summons up the Lord in prayer to cure the “touched” girl.

Denholm Elliot plays Tom Bates, a writer of sappy greeting cards. Joan Plowright is Norma Bates (cute), his clueless wife. I say clueless because she is blissfully unaware of what her husband gets up to most days: being principally the adventures of an older man whose interests are molestation, pederasty, and biblical text. The maudlin, overripe, and overdecorated atmosphere coupled with feverish, uncomfortable performances from the cast leads me to believe that the movie could be edited a hundred ways. What could’ve been a dark comedy, instead plays as a horror-infused MTV video (this was when MTV played music videos).

Dennis Potter’s work worries and intrigues me. As a playwright and television writer, he had always sought out irony at it’s purest, and he went out of his way to write unlikable characters with a tinge of talent to them; you can’t completely hate a Dennis Potter character. You’d have to hate the story, as the character propels the narrative so thoroughly. This is true for 1981’s Pennies From Heaven and later, The Singing Detective. A movie like Brimstone & Treacle could not be made today, or if it were, it would be quickly shelved in favor of something more antiseptic.

With a soundtrack that includes notable musical acts of the time like The Police, The Go-Gos, and Squeeze, the movie was publicized heavily on MTV, and several of the musical interludes in the movie look like standalone music videos, particularly Sting’s “Only You”. Director Richard Loncraine directed another favorite of mine, Michael Palin’s The Missionary. Denholm Elliot is known mainly for “Raiders of the Lost Ark” as Indiana Jones timid colleague, Marcus, as well as Dan Aykroyd’s loyal valet, Coleman, in Trading Places. Joan Plowright won two Golden Globe awards in 1992, for Stalin and Enchanted April (for which she also received an Academy Award nomination). Sting, I believe, is some sort of musician.