“And Then There Were Four” 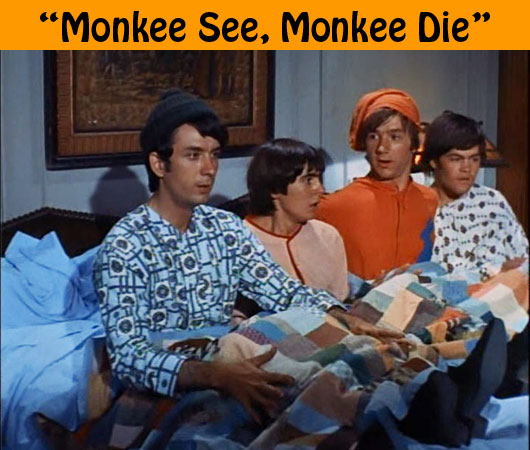 “Monkee See, Monkee Die,” directed by James Frawley, first aired September 19, 1966 on NBC. Episode writer Treva Silverman wrote some other very funny Monkees episodes: “I’ve Got a Little Song Here”, “One Man Shy”, “Son of A Gypsy”, and “A Nice Place to Visit.” According to the IMDB, she wrote “The Card Carrying Red Shoes” as Lee Sanford. Other interesting facts about Silverman: she wrote episodes for The Mary Tyler Moore Show, for which she won an Emmy and created the character of “Georgette”, and she was one of the few working female writers in television at the time of The Monkees.

The story begins with the Monkees rehearsing, which is the first real reference to them as a band. Also appearing for the first time is Mr. Babbitt, who sweeps in accompanied by villainous harpsichord music. Babbitt is demanding the rent, or his lawyer will toss the boys out. Mike ferociously defends them, saying Babbitt is not making any needed repairs to the house. I think I’ve rented from this guy before. Mike quickly comes up with the idea they should pretend not to know the Monkees when the lawyer shows up, so they bring out the costumes and funny voices. The person they end up fooling is a solicitor who came to tell them they’ve been named in the will of an eccentric millionaire. Surely their rent problems are over now?

The Monkees arrive at the late Mr. Cunningham’s spooky house and are immediately startled by an obviously fake bat. The creepy butler, Ralph, takes them to the reading of the will. I love the shot of Ralph leading them to the parlor with Mike in front and the other Monkees hiding behind him. 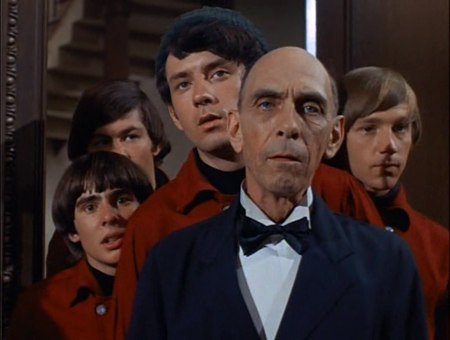 Next, they meet the fabulous Madame Roselle, Mr. Cunningham’s spiritualist, and Mr. Kingsley, Cunningham’s travelling companion and hack travel author. Last but not least, they meet Ellie, Cunningham’s cute niece. She and Davy fall instantly in love and the editors used the starry-eyes special effect for the first time. 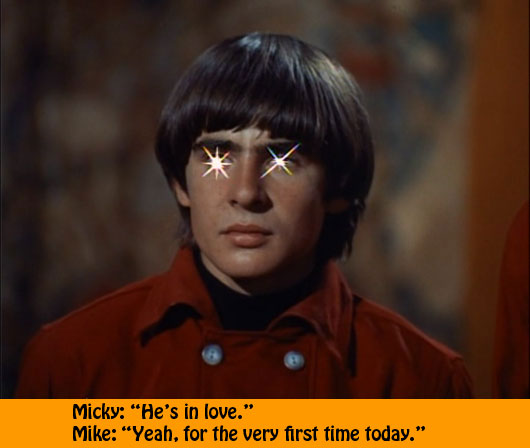 Ellie was played by Stacy Maxwell, who, before The Monkees, had acted alongside Davy in an episode of a show called The Farmer’s Daughter, in which Davy and Stacy performed a very familiar song to Monkees fans: Boyce/Hart’s “Gonna Buy Me a Dog.”

Young, sweet Ellie will be the one to inherit Cunningham’s mansion, provided she spends one night there. This is an unpleasant surprise for Kingsley, Roselle, and Ralph. Cunningham has left the Monkees his library organ, with the stipulation that they play it once before they take it. They get up to play their inheritance and get out, and it really is an awesome organ because when Peter starts to play it, the “Last Train to Clarksville” (Tommy Boyce/Bobby Hart) romp comes out. This was first time the song, and the Monkeemobile, appeared on the show. 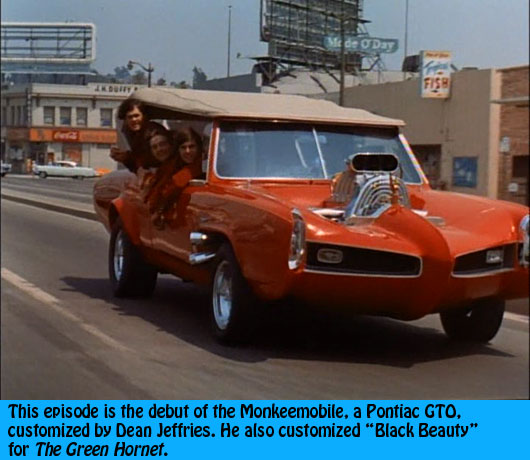 Ralph tells the Monkees they’re trapped on the island due to the “foggy season,” so they go upstairs to bed. I’d ask where they got their pajamas since they didn’t have any luggage (perhaps they have TARDIS technology), but then I’d have to ask why they wear boots to bed. Peter startles Micky, who utters the first “Don’t do that” line that recurs in many future episodes. After getting frightened out of their room, they run into Madame Roselle who tells them the butler may be dead.

Madame Roselle: “I just had a vision about the butler. Either he’s going to take a long, pleasant journey and enjoy good fortune, or he’s dead.”

Mademe Roselle: “Six of one, half a dozen of the other.”

They run downstairs and see a knife in the wall, but no dead Ralph. Micky and Davy act out a Sherlock Holmes/Dr. Watson fantasy and work on solving the mystery. Failing that, they go back to the room to think of a way to escape. This leads to my favorite scene of the episode: Mike explains his plan to get a message out of the mansion with a carrier pigeon and then a Saint Bernard. Including a link to the clip, because my words can’t do that justice.

The Monkees are trying to sleep all in the same tiny bed, when they hear what sounds like gunshots. Out of nowhere, Roselle appears and dramatically tells them Kingsley has been shot. Those that are left in the house sit downstairs discussing Kingsley’s and Ralph’s missing bodies. Micky gets inspired to get the phones to work and scrambles around attaching the telephone receiver to the tubes on an old radio. He successfully contacts some foreign sailors who only know three words of English: “Yes I do.” It was pretty impressive, all the same. 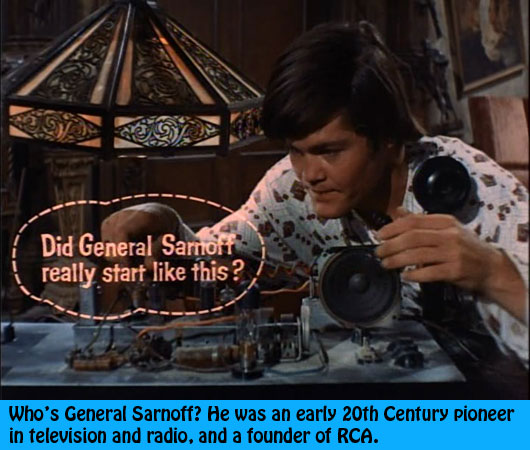 Madame Roselle has them join hands for a séance to reach John Cunningham. The actress playing Roselle is hilarious in this episode, going in and out of her “spiritualist” persona in a snap. She conducts a séance in curlers. Watch the episode one time just keeping an eye on her. Mike is pretty skeptical of this whole thing, and her attempt to reach Cunningham fails. The lights go out, and she disappears. Here’s the first use of Monkee’s running gag “She’s/He’s/It’s gone!” when they see she’s missing. 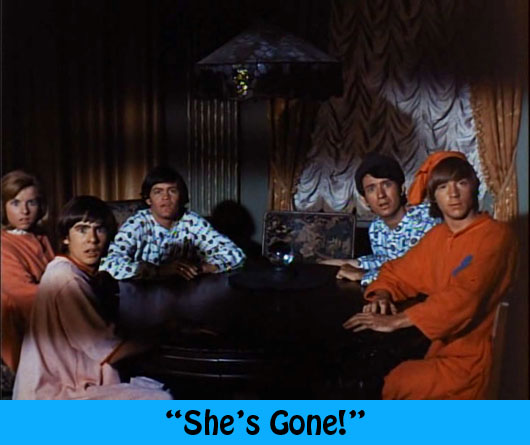 The Monkees and Ellie get out of the mansion as fast as they can before they vanish like the older adults. Mike suggests they play a little music to cheer them up while they wait for the ferry. The song “Tomorrow’s Gonna Be Another Day” (Tommy Boyce/Steve Venet) plays to a romp, which ends with them in monster masks and a fifth guy in a Monkees shirt and mask who scares them off.

Now we get to the real plot: the three older characters are conning Ellie and the Monkees. Davy, Micky, and Mike sneak back into the house and find a very alive Roselle, Ralph, and Kingsley bragging about driving off Ellie so they can take the mansion. Davy wants to use Micky’s experimental knock-out drop to stop them, so he sneaks off to slip them a mickey, so to speak. Peter and Ellie enter noisily and the villains hear them, each in turn coming out to threaten the Monkees with a gun. Who knew so many old folks in the ’60s were packin’ heat? Peter pulls out an imaginary gun and threatens to shoot Ralph. Conveniently, the knock-out drops kick in on each villain just as Peter aims and fires his finger. The bad guys end up in a heap on the ground. In the tag sequence, the Monkees tell their story to the police. 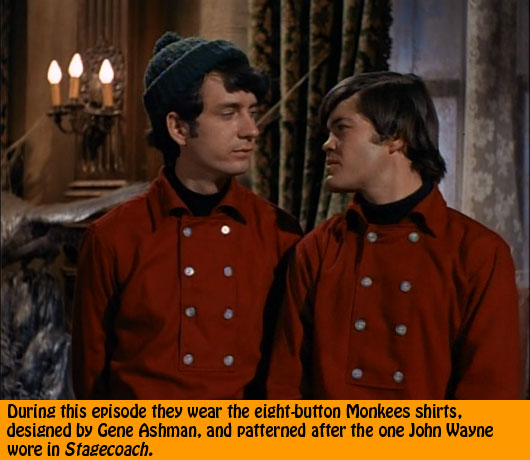 This is one of the funniest episodes of the series and one of my favorites. The guest cast, especially Lea Marmer, is excellent. The pigeon sequence and the séance are two stand-out funny bits in an entire episode full of laugh-out-loud scenes and dialogue. It’s a well-written, solid all-around spoof of Agatha Christie type mystery stories. The personalities and dynamics of the Monkees are clearer here than in the first episode with Mike emerging as the leader, Micky the one with the crazy ideas, Davy the young romantic, and Peter the oddball.

In this episode, as well as “Royal Flush,” there is a division between the old and young characters. The bad guys in this episode are all the older adults. Mr. Babbitt wants to throw the young Monkees out on the street, though he is not a responsible (or even reasonable) landlord. The adult villains in the mansion are plotting to rob teenage Ellie of her inheritance and it’s up to the Monkees to figure it out. There’s no wise grown-up to help or guide them, no adult to be trusted. This was the age of the generation gap and “don’t trust anyone over 30.” “The kids are alright,” but they’re on their own. 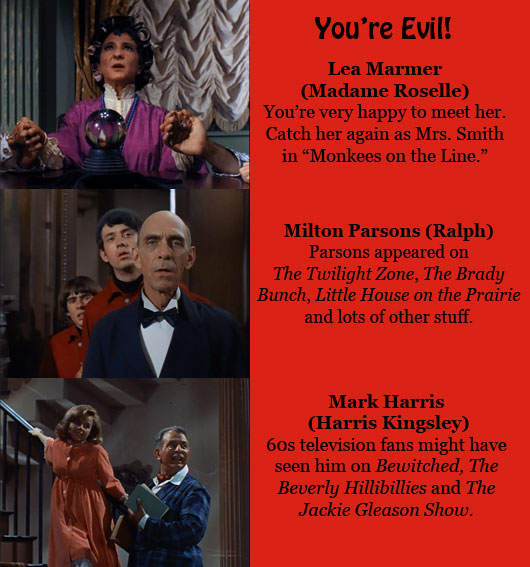 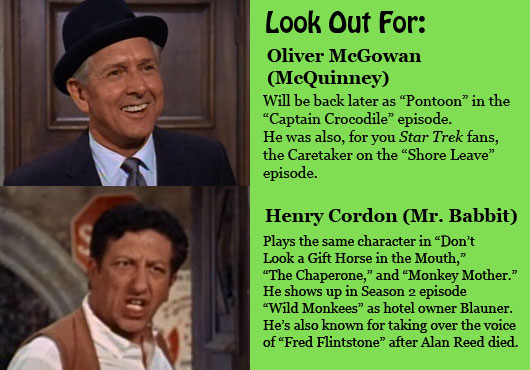