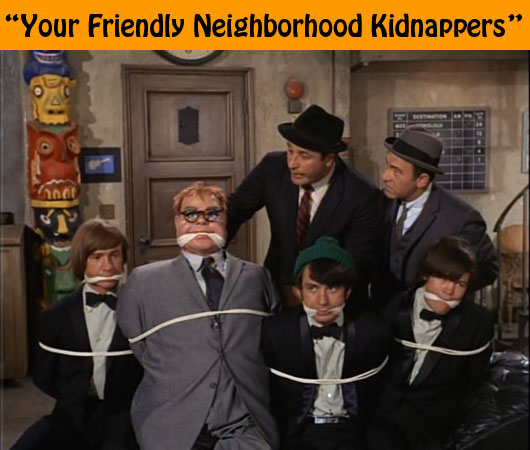 “Your Friendly Neighborhood Kidnappers,” which aired on October 3, 1966, was directed by James Frawley, and written by Dave Evans, his first of seven Monkees scripts. This is the first episode where the plot revolves around the Monkees pursuing success and fame as a band. According to a couple of interviews I found online with Micky Dolenz, here and here, the central premise of the show was a band struggling to be as successful as the Beatles, not to make a show about an American version of the Beatles. It was meant to appeal to young kids struggling in undiscovered bands of their own. Traditionally sitcoms don’t show us successful people who’d be impossible for most of us to relate to.

The story opens with a band contest, and the group onstage is the Four Swine. Micky describes the leather wearing, cigarette puffing Swine as “seedy characters.” This is interesting because in the second season “Wild Monkees” episode, the Monkees will put on similar outfits to impress some biker girls. The “seedy” Swine make fun of the Monkees on their way off stage, handing Micky a banana. The Four Swine manager arranges for the audience to hear Beethoven’s Fifth Symphony instead of the Monkees music when they get on stage and try to play. 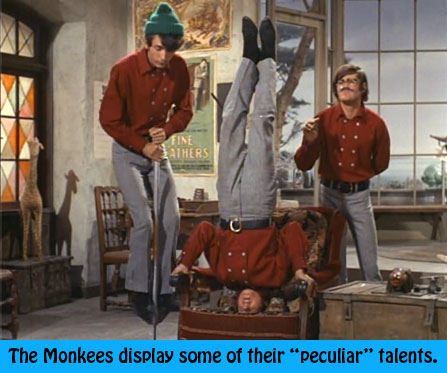 The Swine Manager shows up at the Monkees pad introducing himself as Nick Trump. He claims he’s there to handle their publicity during the contest and pretends he barely knows the Swine. They are surprised they made the finals, but Trump explains the judges “dig Beethoven.” None of the Monkees are taking this seriously: Mike is on a pogo stick, Davy is doing a headstand, and Micky does his Groucho Marx impression. They really do have some “peculiar talents” (to borrow a term from “Prince and the Paupers”). YouTube has a nice clip here. The boys want nothing to do with Trump’s publicity until he says it’s required in the contest rules. I don’t get their aversion to publicity since it could help them get more gigs.  At this point in the episode they don’t know the type of “publicity” that Trump has in mind.

Guitar-wipe to the disco known as the Vincent Van Gogh-Gogh, which appears in a few episodes and was a play on words that I always loved. Trump tells them, via voice-over, they will have their clothes ripped off by crazy teenage girls for a publicity stunt. The Monkees sit there, excited and kind of scared as you would be. Micky and Mike go into an astronaut fantasy as they count down to clothes-ripping. Screaming girls come rushing in and tear the clothes off…some random middle-aged dude in the back. 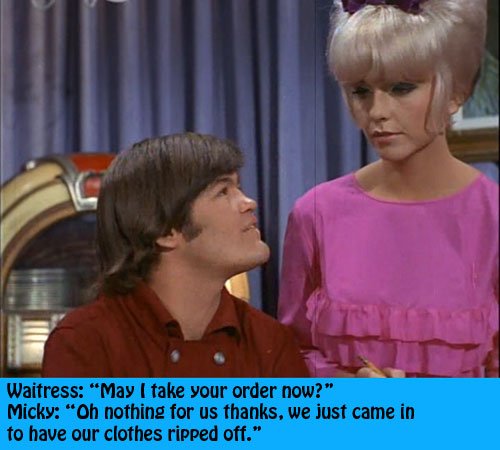 Mike’s facial expressions as he waits to have his clothes ripped off are so good.

Lester Crabtree, the guy who got his clothes ripped off, did get in the newspaper. I love the shot of Micky reading the story and as he puts the paper down and the other three are revealed behind him. Trump’s next idea is to have the Monkees put their hands in cement in front of the Chinese theater. I notice in the background that the marquee says “The Machie” and the names as Nazemize and Dork, The other two read Dourantse, and Juhans, but I can’t see them on my screen. This stunt ends badly because Trump uses quick-drying cement and the boys have to take the block of sidewalk with them to get free. Trump pretends it’s their fault, but offers them one more chance. His final plan is for them to be kidnapped, which will make all the papers. Mike is rightly skeptical of this but the Monkees talk it over (saying rhubarb, rhubarb, in the background) and agree.

Trump calls the kidnappers, one of whom is Mel from the television sitcom, Alice! Always fun to see a famous actor before they played their iconic part. The kidnappers are busy putting a poor victim’s feet in cement, but they agree to take the job. Trump tells the Monkees to dress “black tie” for a daytime kidnapping. Peter tries a few different magical costume changes to get this right, and Davy’s wearing a red smoking jacket that’s different from the others who are in  black tuxes. Mike is skeptical of Micky’s suggestion that they call the late-arriving kidnappers, which leads into a pretend call with the kidnapper’s answering service where Micky resurrects his phony-salesman voice from “Royal Flush.” 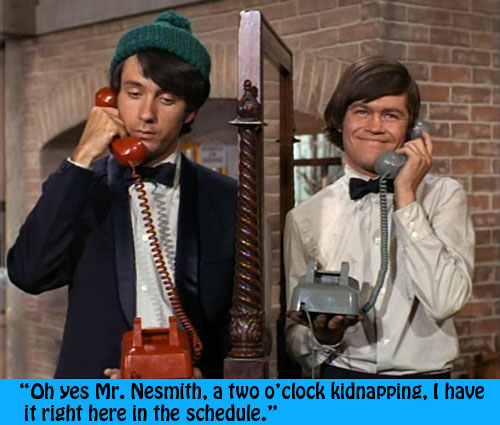 After going to the wrong house, the kidnappers knock politely and check the address with Mike. This is the first mention of their 1334 N. Beechwood address, which was also the address used for the Monkees original fan club. The kidnappers bust out guns and scare the crap out of Peter. They tie up the Monkees with Mr. Schneider replacing the missing Davy. Horace (Louis Quinn) tells George (Vic Tayback) he has to pick up Davy at the disco; however George is intimidated because he can’t do those “crazy dances.” There’s a brilliant screen caption when George practices dancing that reads “Cassius Clay Watch Out.” (Referring to boxer Muhammad Ali, known by his birth name Cassius Clay until 1965.)

George goes to the Vincent Van Gogh-Gogh and finds Davy dancing with his date, (played by Valerie Kairys, who was in 14 Monkees episodes, most appearances uncredited). George tries desperately to blend in with his dancing but Davy takes mercy on him and says they can leave. Davy’s girl wants to go along for the kidnapping, and she ends up bringing everyone at the disco back to their house for a party. I wanted to mention, Davy has a bit of a personality change in this episode. He is fun, charming, and confident; he’s genuinely cool and not the starry-eyed romantic dork he appeared to be in “Royal Flush” and “Monkee See, Monkee Die.”

Back at the pad, the gun-wielding thugs have lost control of the situation because the kids, the staff, even the furniture from the Vincent Van Gogh-Gogh are now in the Monkees pad. The overwhelmed kidnappers tie everyone up, but the kids keep dancing to “Let’s Dance On”  (Tommy Boyce and Bobby Hart) (not credited at the end of the episode) and “I’m Not Your Stepping Stone” (Tommy Boyce and Bobby Hart). Getting tied up does’t bother the kids at all. They make it into a new dance craze. Horace calls Trump to tell him he’s going to have to cough up more money to kidnap the entire crowd, but Trump refuses. Davy helpfully empties the room for them by playing a polka on the jukebox, causing the kids to stampede right back out of the house. 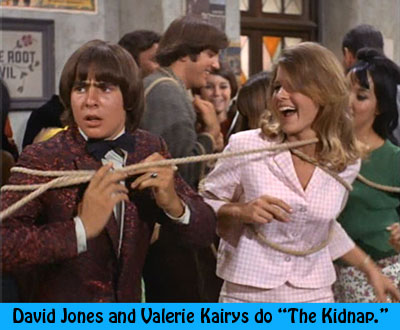 Trump reveals his sinister plot: this is no publicity stunt, the kidnappers are real and there to keep the Monkees from participating in the contest so the Four Swine can win. I think everyone but the Monkees saw this coming. This marks the second episode where we have the bad guys holding the boys captive until a certain time has passed, the first being “Royal Flush.”  The kidnappers lock the Monkees in the bedroom while they play cards with the stuffed chimp.

The Monkees try to figure out how to escape in time to make the contest. Micky has more ideas in five minutes than I have all day. The editors put an image of light bulb directly over his head to signify this, but he complains, “I can’t think with this bulb hanging over my head,” and it pops like a balloon and vanishes (“thank you”). His first plan is to toss a hypnotized Peter out the window. (I would love to have Micky’s hypnotist talents for putting kids to bed.) Once this idea is dismissed, Micky makes a rope for them to crawl down until Mike points out they’re on the first floor. Okay, hold it, in that case why don’t they all just go out the window?

Mike, who really is the group skeptic, tries to warn Micky against his idea of punching the kidnappers. He’s proven right when Micky’s fist hits George’s hard face. Throughout this, Peter keeps the audience aware that the Monkees’ need to hurry by announcing the time, which the screen caps helpfully display in Central Time. Micky finally manages to con their way out, pretending he has a vial of Nitroglycerin and threatening the kidnappers with it until they back into the bedroom. Micky confesses to the other three that he has no idea what’s really in the vial and tosses it off the set where it explodes in a surprisingly good effect.

The freed Monkees head for the contest in their matching Monkees shirts. But wait: the gangsters get out of the “locked room” right away and begin a romp chase scene to “Last Train to Clarksville” (Tommy Boyce/Bobby Hart) . This is the third time in as many episodes they played this song. The chase includes scenes in a city park, a desert, a western scene, and stock footage of covered wagons. It ends with the Monkees clobbering the kidnappers and playing their song in the contest. Before the MC can announce the contest winners, there’s a fourth-wall-breaking bit from Peter: 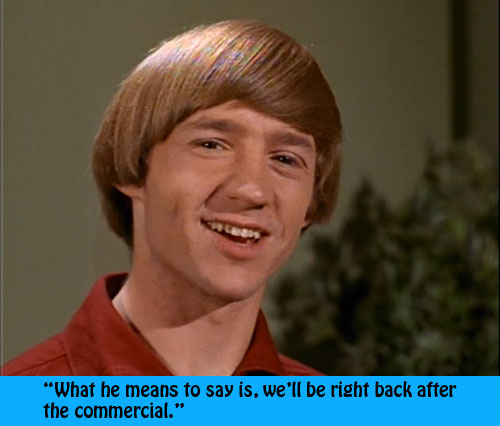 The Four Swine and Trump go to jail in matching jail-striped outfits. The Monkees get “special consideration” for their trouble, but the winners are Lester Crabtree and the Three Crabs! Screaming girls run onstage to rip Lester’s clothes off again. Success eludes the Monkees who conclude that all it takes to get famous is having your clothes ripped off. They immediately tear off each other’s shirts in the most unintentionally homoerotic moment ever on the series. It’s also one of the many cynical comments about show business that The Monkees made over the course of the series. 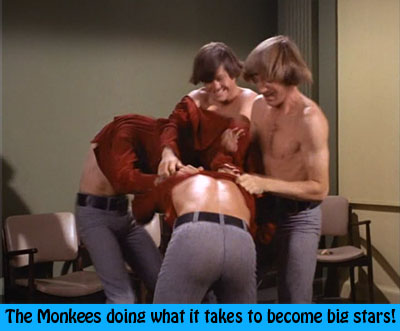 Tag sequence is an interview because the show is once again a minute short. Producer Bob Rafelson interviews them about their success since being on the show, which goes along well with the storyline. Mike reveals that he was a troublemaker when he was a kid and certain people from his past were surprised to see him doing well. He also says it’s nice to have a little extra money to spend since getting the role on the show.

Another one of my favorite episodes, with a satisfying set-up and payoff at the end. I love the fact that the plot is about their struggles as a band, and I like the focus on them as an ensemble cast as in “Monkee See, Monkee Die.” They’re at their best when working together. There is also the remarkable humor commenting on the fact that it is a television show. The producers/writers/editors are not expecting you to get lost in the “reality” of the story; instead there’s lots of breaking the fourth wall, the screen captions, etc. They know that we know we’re watching a show, and they let us in on the joke.

And now, here’s a mini-tribute to Micky Dolenz. With his sharp line delivery, funny voices, and expressive face, he can always be counted on for an out-loud laugh at least once in every episode. 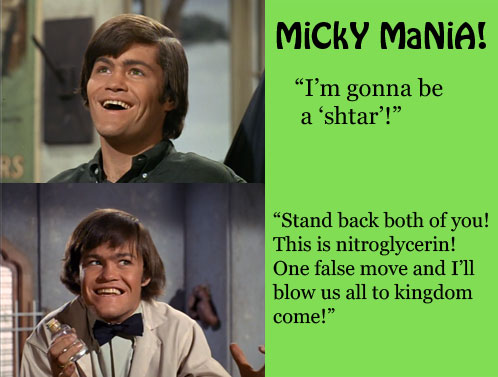 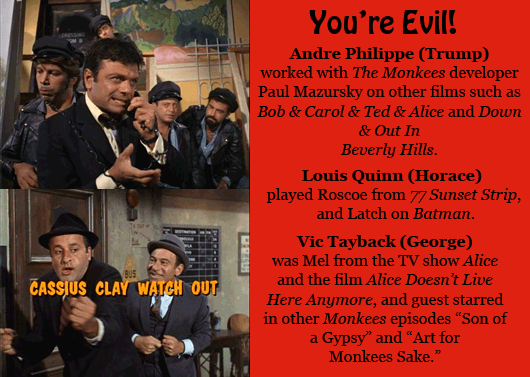 Happy Holidays everyone! Thank you all so much for reading these. I am having a lot of fun researching and writing them, and I really appreciate Monkees fans out there I can share this with. Be sure to check out the Blissville podcast on “The Monkees.”

8 thoughts on “Monkees vs. Macheen: “Your Friendly Neighborhood Kidnappers””