“Sorry we were gone so long, but we had to pick up Hank!” 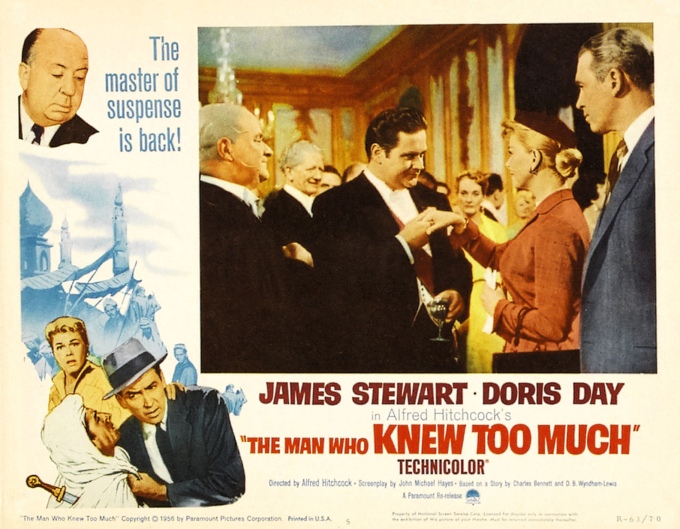 The Man Who Knew Too Much, 1956 (James Stewart), Paramount Pictures

In what may have been (for the time) the boldest examination of American exceptionalism and “xenophobia” (though I hate to bandy that term in the wake of overuse), The Man Who Knew Too Much provides thrills and agonizing suspense. Indiana tourists in Marrakesh witness the murder of an new acquaintance. Before the man expires, he imparts information about a planned assassination of a statesman in London to wide-eyed patriarch James Stewart. In order to keep this revelation a secret, double agents disguised as a British husband and wife abduct Stewart’s (and wife Doris Day’s) young son, Hank.

Fearing reprisal, Jimmy and Doris take it upon themselves to rescue their son without the aid of local authorities. They keep mum on the assassination plot, travel to London (where former singer Day is given a hero’s welcome), and follow up on clues given to Stewart by the dead man. In an amusing twist, Ambrose Chapel is revealed not to be a person, but a place. Stewart causes havoc on the namesake taxidermist, and it takes a while before he can clear up that misunderstanding. Notice how briskly this plot unfolds? We’re in Marrakesh for a little while, and then we’re in England. Stewart and Day next meet up at the chapel where Hank is being held.

The assassination will occur at the clash of symbols during the allegro agitato’s climax of Arthur Benjamin’s Storm Clouds Cantata at the Royal Albert Hall during a performance for the visiting Prime Minister. The Prime Minister is to be the target. Doris Day lets out a blood-curdling scream that distracts the would-be killer and alerts the audience to the situation. Later, she uses her showcase song, “Que Sera, Sera (Whatever Will Be, Will Be)” (introduced in this movie), to let Hank know she and his father are nearby. Jimmy and Doris find themselves to be reluctant heroes in a story of political intrigue, and that’s what makes The Man Who Knew Too Much an incredibly fun movie to watch.

What is most intriguing about The Man Who Knew Too Much are the unusual character motivations at play. Even before the thrills begin, Doris Day’s character is revealed to be paranoid (she’s always commenting on curious onlookers) and somewhat insecure in her decision to marry a doctor, though she does want to have another baby. Jimmy Stewart’s character seems to have little patience or respect for cultures and practices outside of his perceived friendly and familiar American traditions (his adventure in a Marrakesh restaurant is particular cringe-worthy). British and Moroccan law enforcement is portrayed as downright lackadaisical, inefficient, and incompetent.

Between the years 1954 and 1956, Alfred Hitchcock made two movies per year; an incredible body of work from Dial M for Murder to The Wrong Man. After this highly energetic, creative period, he would begin to slow, averaging one movie every year until 1960’s Psycho (his most commercially-successful film) and the resulting cloud of notoriety that would dog his steps until his death in 1980. Because of Psycho, Hitchcock’s name would become synonymous with psychological horror and shock. He attempted to revise his legacy with an old-fashioned monster movie in The Birds (1963), and another case study of neurosis with Marnie (1964) before returning to political intrigue and espionage with Torn Curtain and Topaz, but none of these films would equal the financial and critical success of Psycho. In a way, he was consumed by his own success.

That about does it for Alfred Hitchcock month. The five “missing Hitchcocks” were re-released to theaters starting in October of 1983. The next year, the movies made their premieres on cable television as part of a Hitchcock retrospective on The Movie Channel. This was my Hitchcock education for a time until home media increased his popularity even more. For more fun stuff about Hitchcock, check out the “Missing Hitchcocks” episode of my podcast, Two Davids Walk Into A Bar, as well as David & David and Gene & Roger: A Siskel & Ebert Podcast.

Our first cable box was a non-descript metal contraption with a rotary dial and unlimited potential (with no brand name – weird).  We flipped it on, and the first thing we noticed was that the reception was crystal-clear; no ghosting, no snow, no fuzzy images.  We had the premium package: HBO, Cinemax, The Movie Channel, MTV, Nickelodeon, CNN, The Disney Channel, and the local network affiliates.  About $25-$30 a month.  Each week (and sometimes twice a week!), “Vintage Cable Box” explores the wonderful world of premium Cable TV of the early eighties.