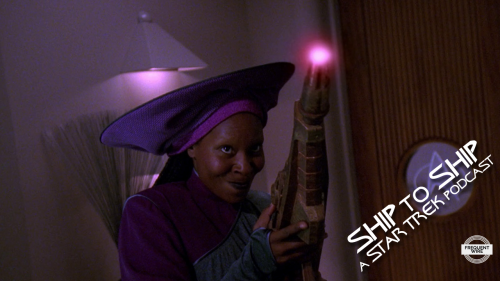 SHIP TO SHIP: A Star Trek Podcast The Whoopi Quickie

The two Davids engage in a charged debate about Whoopi Goldberg’s recent conduct on The View with regard to guest Jeanine Pirro. This is the full discussion which will be featured on a later episode of the podcast.

Whoopi Goldberg represents, along with Rob Reiner, the much older contingent of new-wave leftism. Mostly celebrities. Madonna, Ashley Judd. More disturbingly, they’re old enough to remember the common-sense, reason, and practicality of Liberalism – this is the view of Liberalism more in keeping with what’s being called Libertarianism now. Libertarianism is the classic Liberal view of the sovereignity of the Individual. More importantly, it’s become the rhetoric of “just leave me alone, don’t tamper with my freedom, my personal liberty.” That used to be the classic Liberal view. I can forgive the kids under 40 for that attitude. They’re kids.

Judge Jeanine Pirro called it, “Trump Derangement Syndrome.” I agree with her. The simple reality of Trump being elected President has driven people to madness, derangement. Whoopi Goldberg’s reaction is proof-positive, even as she denies it.

© Frequent Wire, David Lawler copyright 2018 for all original vocal and audio content featuring David Lawler and selected guests each episode. This podcast, “SHIP TO SHIP: A Star Trek Podcast” is not affiliated with CBS Entertainment, Paramount Pictures, Paramount Television, Desilu Television, Gulf + Western, or the estate of Gene Roddenberry. Any and all images, audio clips, and dialogue extracts are the property of their respective copyright owners. This blog and podcast was created for criticism, research, and is completely nonprofit, and should be considered Fair Use as stated in the Copyright Act of 1976, 17 U.S.C. section 107. It is not an official product, and it should not be sold nor bought; this is intended for private use, and any public broadcast is not recommended. All television, film, and music clips appear under Fair Use as well.