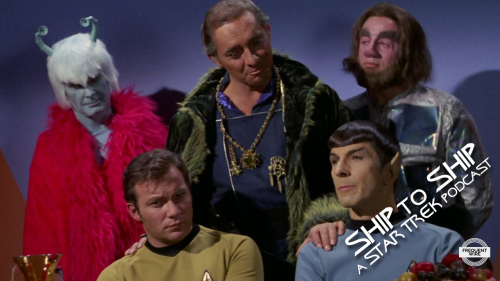 SHIP TO SHIP: A Star Trek Podcast Show 204 “Fruity as a Nutcake”

The Federation doesn’t know how to handle it’s crazier citizens. Most forms of mental illness were allegedly wiped out before we came to this brave new future. That’s the main point of these classic Trek episodes, “Dagger of the Mind” and “Whom Gods Destroy.” In the first episode (an early Roddenberry-produced entry), Kirk becomes the subject of a mad scientist’s fiendish experiments. In the second episode, Kirk and Spock are held hostage by a once-great now insane Starfleet hero named Garth who, inexplicably builds a doomsday explosive (undoubtedly in his spare, unsupervised time), and it’s up to the boys to stop him.

© Frequent Wire, David Lawler copyright 2018 for all original vocal and audio content featuring David Lawler and selected guests each episode. This podcast, “SHIP TO SHIP: A Star Trek Podcast” is not affiliated with CBS Entertainment, Paramount Pictures, Paramount Television, Desilu Television, Gulf + Western, or the estate of Gene Roddenberry. Any and all images, audio clips, and dialogue extracts are the property of their respective copyright owners. This blog and podcast was created for criticism, research, and is completely nonprofit, and should be considered Fair Use as stated in the Copyright Act of 1976, 17 U.S.C. section 107. It is not an official product, and it should not be sold nor bought; this is intended for private use, and any public broadcast is not recommended. All television, film, and music clips appear under Fair Use as well.