90 episodes? I can’t believe it, but I guess it make sense if you do the arithmetic. The first episode I recorded (with my dear friend, Neena) came out December 5th of 2014. It was recorded the day after Thanksgiving that year. In the middle of April, 2017, we have 90 episodes. This is the second-to-last for this series and featuring frequent collaborator Mark Jeacoma. Mark and I discuss musical tastes and the worldwide phenomenon of podcasting.

Thanks to Chris Hasler for suggesting “Down Deep Inside (Theme From “The Deep”).

This blog and podcast was created for criticism, research, and is completely nonprofit, and should be considered Fair Use as stated in the Copyright Act of 1976, 17 U.S.C. section 107. It is not an official product, and it should not be sold nor bought; this is intended for private use, and any public broadcast is not recommended.

Written by David Lawler
Additional Commentary by Mark Jeacoma
Original Music by Alex Saltz, APS Mastering
Introduction Music: “What You Need” (Andrew Farris, Michael Hutchence) by INXS (from the 1985 album “Listen Like Thieves”).
Audio Clips: “And When The Sky Was Opened”, “What You Need”.

© BlissVille, David Lawler copyright 2016 for all original vocal and audio content featuring David Lawler and selected guests each episode. Original Music © Alex Saltz copyright 2015. This podcast, “That Twilighty Show About That Zone” is not affiliated with CBS Entertainment, the CBS Television Network, or The Rod Serling Estate. Any and all images, audio clips, and dialogue extracts are the property of their respective copyright owners. This blog and podcast was created for criticism, research, and is completely nonprofit, and should be considered Fair Use as stated in the Copyright Act of 1976, 17 U.S.C. section 107. It is not an official product, and it should not be sold nor bought; this is intended for private use, and any public broadcast is not recommended. All music clips appear under Fair Use as well. If you’re thinking of suing because you want a piece of the pie, please remember, there is no actual pie. We at BlissVille have no money, and as such, cannot compensate you. If anything, we’re doing you a favor, so please be kind. I do this ’cause it’s fun, and nothing else.

“Come on Harry, the maiden fair waits for her knight in shining corduroy.”

To mark the occasion of the one-year anniversary of my association with Mark Jeacoma and his wonderful VHS Rewind! podcast and blog, I am adding a previous review I wrote for the 1982 horror anthology, Creepshow, and adapting it for this Vintage Cable Box review.  This was a movie I absolutely fell in love with when I first saw it on cable television in 1984. 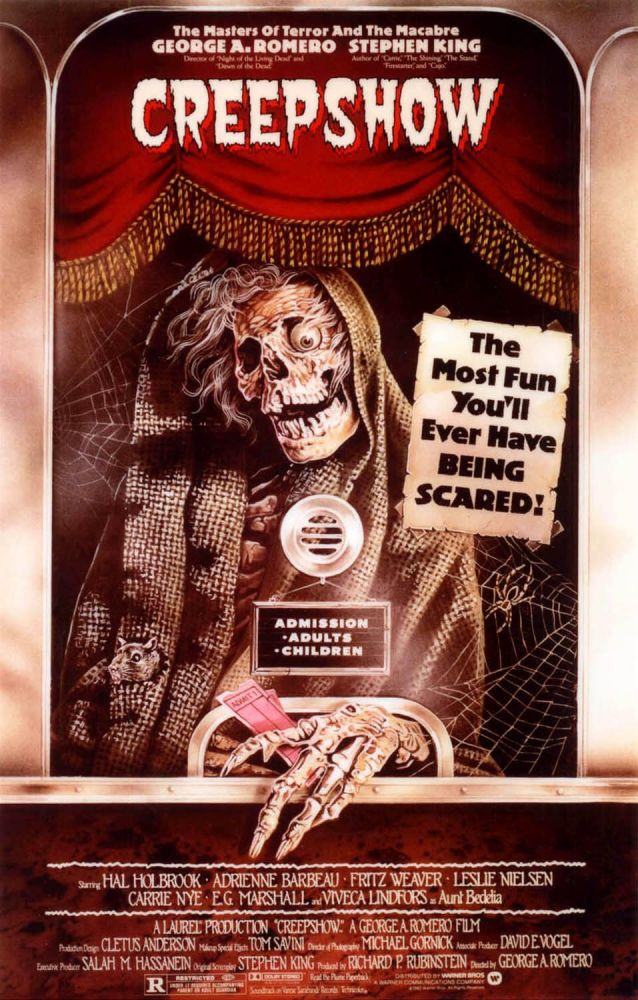 It seems most movies these days are based around comic books and toys, but in 1982, the double-whammy collaboration of Stephen King and George A. Romero, produced the original comic-book adaptation, Creepshow, one of the great horror movies of the early 1980s. Inspired by Max Gaines and Educational Comics’ Tales From the Crypt, The Vault of Horror and later, Mad Magazine, Creepshow gives us five fun stories loaded with graphic violence and intended for adults only.

George A. Romero, best known for Night of the Living Dead, the grandfather of the modern zombie movie, had directed cult favorites, The Crazies, Martin, and Knightriders. King, reportedly a fan of Romero’s work, suggested they collaborate on The Stand and wrote Creepshow as a sample screenplay to see if the two could successfully work together. This was due to the disappointment he felt from Stanley Kubrick’s adaptation of King’s The Shining.

Creepshow is an anthology of five stories about familial revenge, hapless hillbillies, a Tasmanian devil in a crate, the consequences of infidelity, and cockroaches (lots of freaking cockroaches!). What really propels the stories is a wicked sense of humor, dark comedy, and lots of gore. A great cast (Ted Danson and Ed Harris in early roles, Leslie Nielsen in one of his last dramatic roles, Hal Holbrook, Adrienne Barbeau, Fritz Weaver, and E.G. Marshall) round out the carnage, and though the film only earned modest receipts at the box office, it did very well in pay TV and home video markets.

Romero’s lighting, use of shadow and bold primary color along with the continuity device of using comic book cells and the framing story of an abusive father and his sociopath son (played by Stephen King’s son, Joe) deconstruct the horror genre and places it in a post-modern context, much like Romero would do with Day of the Dead, the underrated Monkey Shines, and Tales From The Darkside (an anthology television series based, in part, on Creepshow).

Creepshow was followed by two lackluster sequels, Creepshow 2 in 1987 (based on stories, not a script by King), and the “unofficial” no-budget Creepshow 3 in 2007. Romero would later work with Stephen King for The Dark Half in 1993, but that film was shelved for two years due to Orion’s impending bankruptcy.

The entry was written prior to the beginning of my Vintage Cable Box articles to tie-in with the release of a VHS Rewind podcast with Mark Jeacoma and Chris Hasler that has still not seen the light of day.  I volunteered to edit the episode, and I am grateful to Mark for giving me the opportunity, but I think I cut too deep, removing a lot of the spontaneity that is a hallmark of that fine podcast. 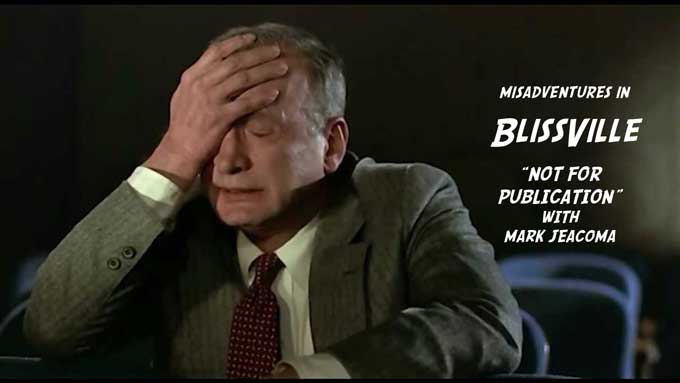 Found footage is literally just that – footage found. You’re walking on the street. You stop at a corner. There’s a garbage can on the corner. You take a peak inside, like you would, and you see a stack of video-tapes or even discs, but they’re not labeled in the conventional sense. These aren’t copies of “Night Patrol” or “Jaws” released by video companies. These aren’t attractive-looking with glossy slipcovers and keep-cases. These are BASF, Maxell, Sony tapes. They look like blanks, until you see the sticker on the side; a handwritten label that reads, “DARCY’S CONFIRMATION AGE SEVEN, ST. JOSEPH’S CHURCH, ASTORIA DECEMBER 15 1996” or something similar. “POP-POP RENOVATES THE GARAGE, JULY 6, 1992” or something else, something mysterious.

You can hear Mark Jeacoma’s insanely good podcasts at: